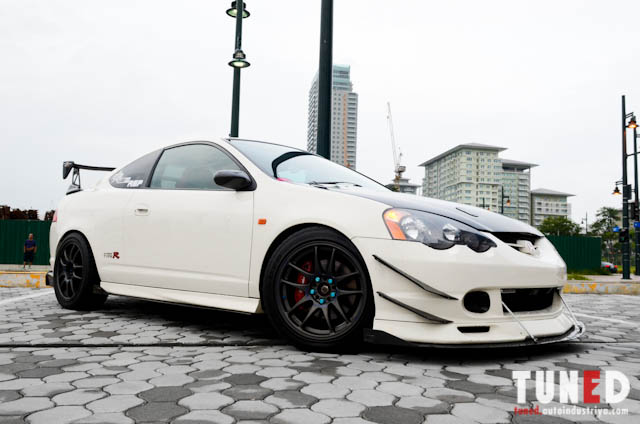 With an awesome K-series engine under the hood and a fantastic chassis to build upon, the Integra (DC5) is certainly something highly desirable. Case in point here where were talking about a DC5 Type-R variant. Any Honda fanatic knows that whether it’s a Civic or an Integra, as long as it a legit Type-R, its all good and straight-out very desirable. Well it should because it’s a rolling piece of performance oriented mechanical marvel from the land of the rising sun. From the engine right down to the chassis and suspension, almost every part has been tuned to make the whole car go fast and nimble.

Under the hood of this wicked DC5 is the much sought after K20A engine that in stock form is rated at 200+ horses. But as with most enthusiasts, the notion of making something even better seems to be the norm most especially when it comes to cars. As such, the engine’s bottom end has been beefed up with a set of Wiseco forged pistons and rods. The cylinder head up top has cams, valves, valve springs and retainers from Drag Cartel for a bulletproof valve train. It was also given a custom headwork by H3 Autoworks using Drag Cartel specs. An RBC manifold was chosen next since this intake is ideal with more aggressive aftermarket camshafts. Also on the list are an ASP custom header, RC (550cc) injectors and a 70mm throttle body. Orchestrating the overall activities of the engine is a fully programmable Hondata KPro ECU that coerces the engine to put out 240whp and 167 lbs-ft of torque in a pure 2.0 liter normally aspirated engine.

Not only can this DC5 go fast in straight line, but it can also tackle the twisties for those addicting track days. As such, an Apexi N1 Type Pro coilovers was chosen along with Skunk2 lower control arms. To ensure that the chassis would feel solid and resist body flex, a Password JDM lower tie bar, Spoon upper tie bar, and Mugen strut bars at the fore and aft take care of stiffening up things. As far as rollers go, the owner opted for a set of 17-inch reverse staggered Work CR wheels (9.5 front/8.5 rear) shod with super sticky Toyo R1R tires. Carbon fiber canards up front as well as a carbon fiber front splitter greatly help in the aero aspect. With a well chosen host of performance mods on this DC5 who’s to argue?

View all posts by Francis Pallarco →