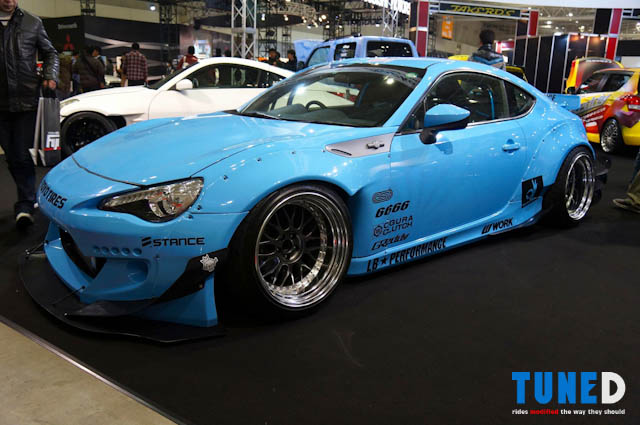 With the Tokyo Auto Salon beginning the automotive calendar for the year, it presents a wondrous opportunity for tuners, builders, and manufacturers alike to display their latest products and offerings to the public. Given that opportunity, participants of the show, mostly heavy-hitter tuners from across japan, spare no expense to highlight any of their cars. From the top trendsetters of styling to the signature custom one-off builders, plenty of builds display various elements of creativity that will eventually inspire more enthusiasts to follow their lead. That said, most of the vehicles in the event ought to reveal the various trends and styles that the aftermarket is heading towards for the course of the year. 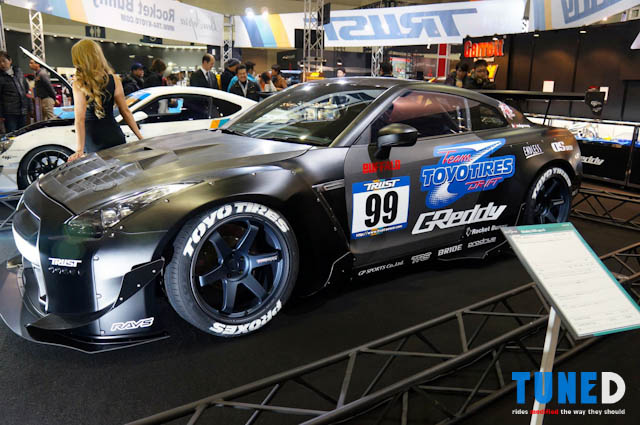 For starters, here we have the Greddy Nissan GT-R adorned with the new Rocket Bunny kit by Kei Miura. Miura-san, or ‘that guy behind the widebody Toyota 86 kit’ has been churning out the Rocket Bunny look for various vehicles throughout 2013, with this GT-R being his latest creation.This car is a perfect platform for Miura-san to showcase his work, as this particular GT-R has actually been converted by Greddy to rear-wheel drive and is set to compete this year in the D1GP. 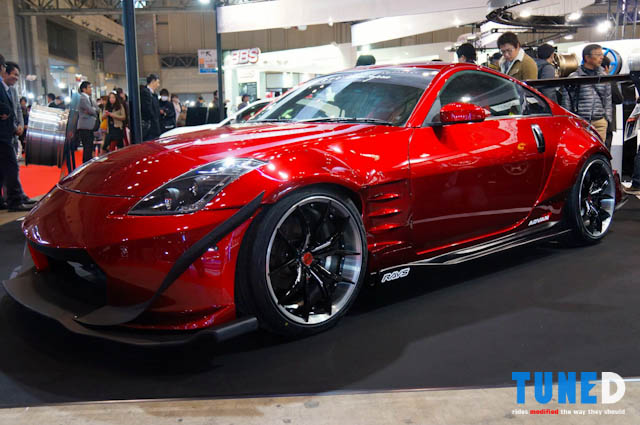 Another kit that made its debut at TAS 2014 is this new widebody for the Nissan 350z by BenSopra. Having made a runaway success out of their Nissan GT-R kit, BenSopra set their sights on the 350z to give it the same half-blistered fender look. 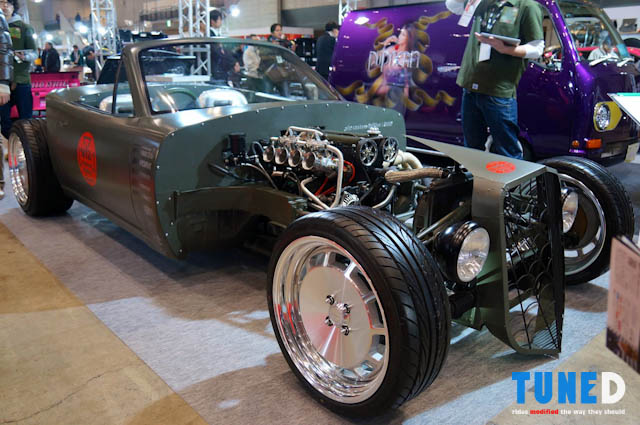 When coming up with a build often there will be crazy ideas thrown around for good measure, it’s no question then that the guys from Wiz University that built this ‘Wiz Concept Rod’ went all in with one of those ideas. What started out as a first gen Mazda Miata (NA8C) was sectioned from the firewall forward and from there built with a tube frame to support the engine as well as pretty much the whole front track. 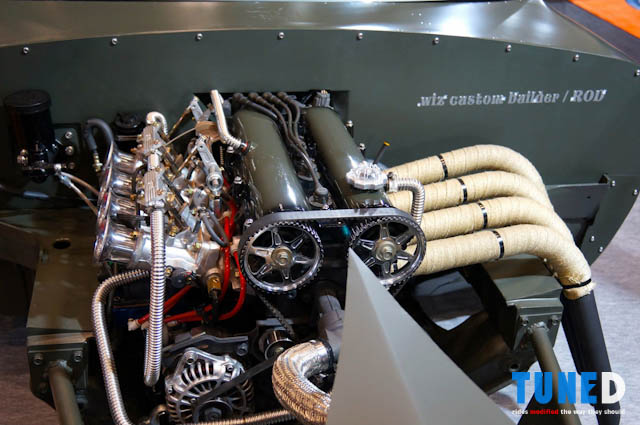 It’s clear to see that they went with a military-esque hotrod look for this car. Complete with the grill, olive drab paint, and open wheels to make this Miata a tad different from any other. 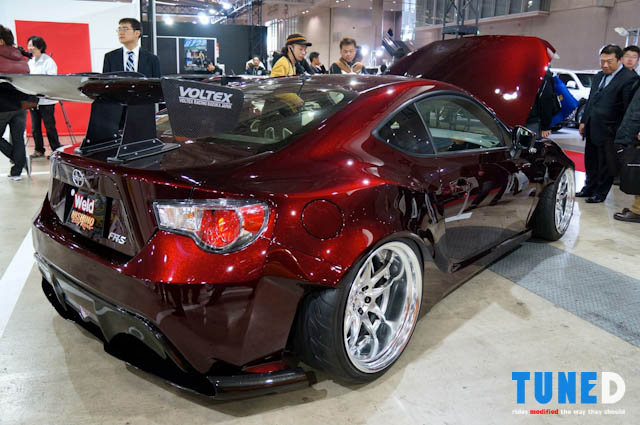 Of course, the Toyota 86 isn’t something to miss when it comes to current trends in the aftermarket. With the countless parts and options available for the lithe sports car many have set out to personalize it to their liking. Take Weld for example, they have chosen to create their own kit for the 86. Unlike Miura-san and his world-acclaimed Rocket Bunny kit however, Weld has gone the old fashioned way to build this kit. The whole widebody you see here is hand crafted and fashioned with sheet metal. You’ll notice that the fenders, while massively pumped still maintain a smooth streamline to the car’s angular features. 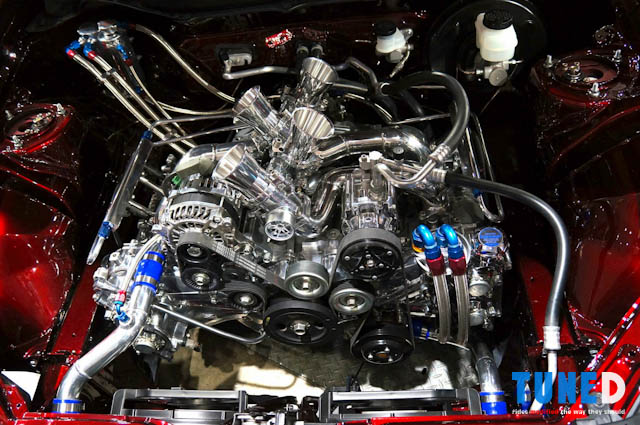 The engine too has gotten some one-off treatment. Besides the cleanly shaven and tucked engine bay, all the plastic intake box and ducting and even the factory intake manifold have been replaced by four individual throttle bodies. This ought to be heard once they get it started! 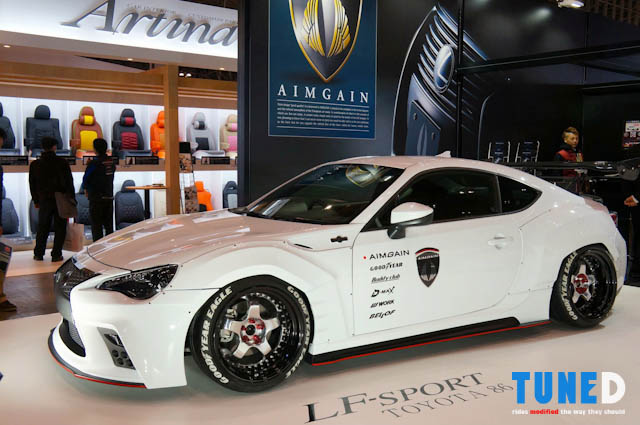 Aimgain has also released another kit for the 86, this one sporting a curious front end that imitates the signature Spindle Grill of the current lineup of Lexus. Striking as the front is, the squared off riveted fenders also provide a rather works-inspired look to even out the classy front end. 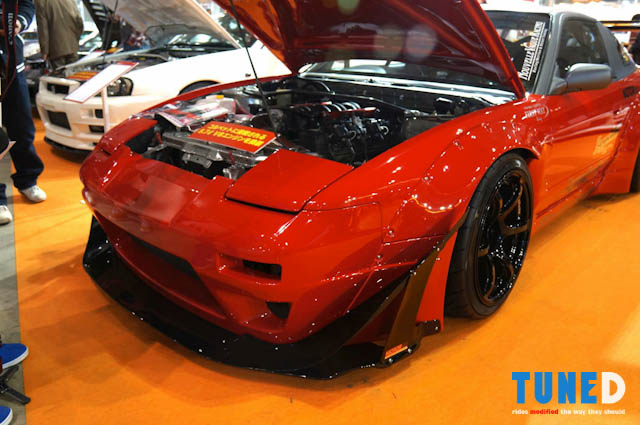 This Nissan 180SX from Nouvelle Vague Racing, while looking mighty purposeful with the aggressive Rocket Bunny Ver. 2 kit and GT wing, has the proof to back it up with a crazy engine swap. Underneath the bonnet you will find an LS3 V8 motor from a C6 Chevrolet Corvette that looked like it was swapped pretty neatly, making it look right at home in the 180’s bay. 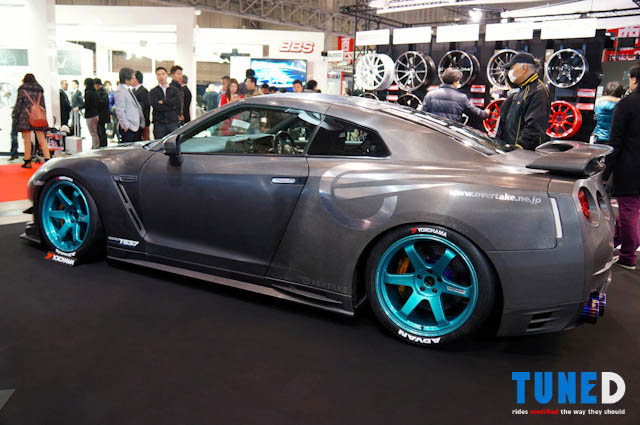 Lastly, we have another GT-R by Overtake with its full dry carbon fiber body. Seeing as the GT-R is pretty much a heavyweight, the solution of lightening by replacing all body panels with dry carbon fiber is another take on extracting more from this platform aside from adding more power.

While these are only a very few examples of cars at the show this year, it’s fairly clear to see that for the most part builders are out to create widebody kits or even full body shells for a variety of cars. All of these, whether in pursuit of performance or purely for aesthetics is set to keep the market buzzing with many choices for personalizing their vehicles.

The Sushi Factory Meet and Run: A Different Take on a Saturday Night Out
The Epic Matsuri Series 2013: The Tanaybürgring