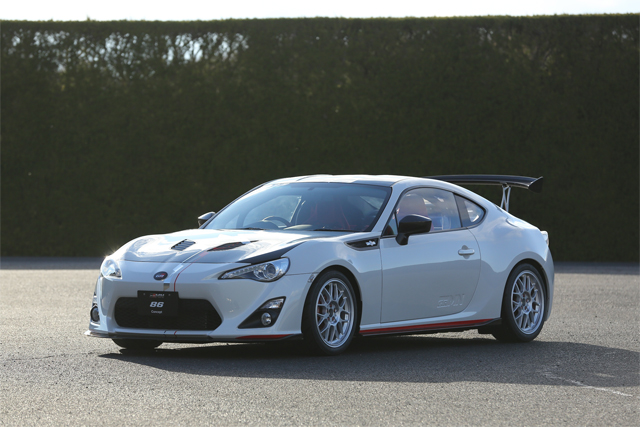 Toyota’s Gazoo Racing performance division has unveiled their GRMN 86 Concept at the 2014 Tokyo Auto Salon. The concept car gets inspiration from the Gazoo Racing Toyota 86 Nurburgring 24-Hour race car for its more aggressive carbon-fiber infused exterior consists of a large rear GT-style wing, vented hood, trunk, and roof as part of its diet. Additional lightening through replacing windows with polycarbonate has resulted in a total of 75 kg weight savings.

Subtle Gazoo Racing livery distinctly set it apart from a normal 86, while the ‘GR’ logo embedded on the doors send a striking statement on the model’s identity.

Engine-wise, the GRMN 86 supposedly has a re-tuned engine, but no official performance figures were given. The suspension as received re-tuning for the dampers while the ride height has been lowered by 10mm for a lower center of gravity and the chassis receives additional rigidity improvements for better handling. The brakes have also been upgraded to multi-piston monoblock calipers with larger rotors.

While many would compare the new GRMN 86 Concept to last year’s Platinum Concept or even the twin-charged concept, this is as close it gets to a street-legal GRMN 86 model if they ever decide to release one.

View all posts by Brent Co →

Life As A Car Guy, Interlude 3: A Love Letter to the Fast & Furious Movies
The Sushi Factory Meet and Run: A Different Take on a Saturday Night Out