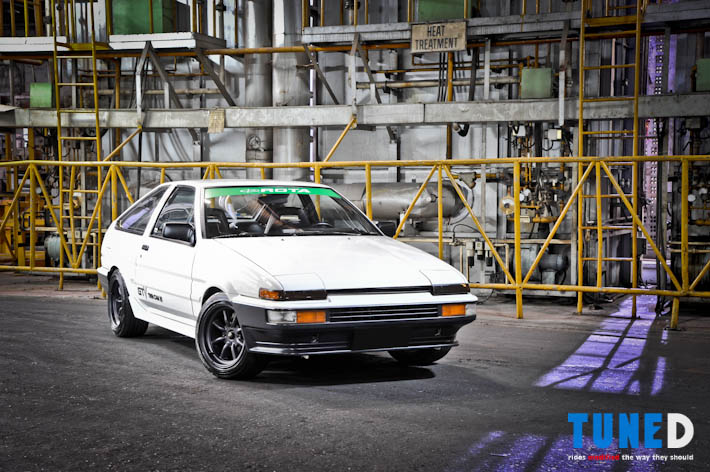 Every car manufacturer worth its salt has created a car that made a lasting impression on the people. A car that, be it a game-changer or something that breaks the norm, can easily be associated with the brand and what it stands for. While Toyota has made plenty of wonderful cars throughout the years, only a handful of them have come close to the cult-like following that the Toyota AE86 or ‘Hachi-Roku’ enjoys today. 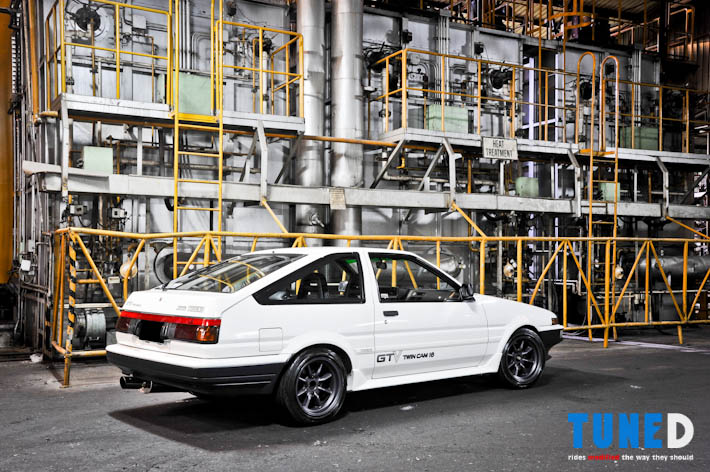 Affordable, practical, and with sporty handling to boot, the AE86 was a car that defined ‘jack of all trades’ in its day. Such is the impact of this car that Toyota recently recreated a car patterned after the AE86’s consumer-winning formula. (Hint: You don’t need one, I’m sure you know all about that car already.) BRZ vs. 86 Comparo.

That said, the example we have here from Rota Wheels embodies the key characteristics that I believe Toyota had in mind for the Trueno, albeit accentuated further with subtle yet tasteful modifications. 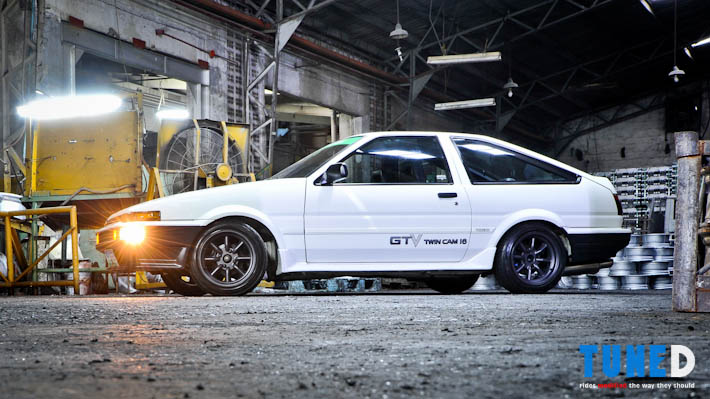 For starters, the car has been adorned with a full JDM GTV Spec conversion both for the exterior and interior of the car. Complimented by all original stickers to mark the trim, this provides the factory look with a bit of edge for the exterior. Being a car from Rota Wheels means this Toyota AE86 becomes a rolling showcase as it goes through several sets of wheels to alter its look. On this set of photos it’s rocking 15×8 Rota RK-Rs. Underneath the wheels lies the standard brake system adorned with stainless steel lines and Project Mu brake pads all around to provide more than enough bite to stop a lightweight car such as this. Footwork has also been upgraded with a set of Stivo Coilovers to further improve handling and to give the AE86 a noticeable drop. 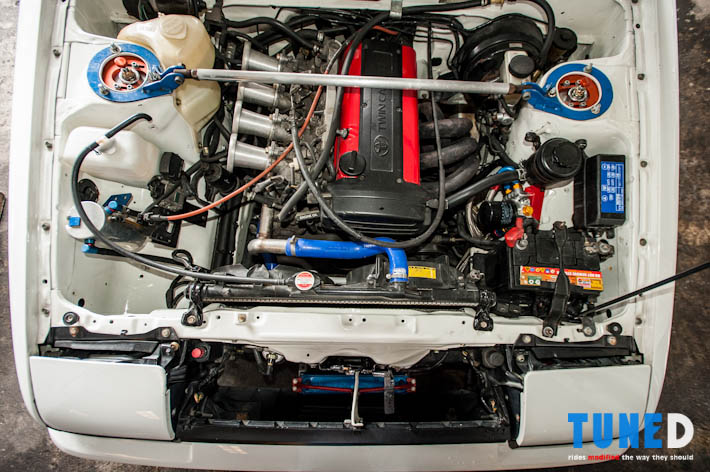 The 20 valve 4AGE from the late 90’s Levins and Truenos, being the penultimate engine of the 4A family, is a popular swap among AE86 enthusiasts. Capable of revving all the way up to 10,000rpm, the 4AGE 20V makes an unmistakable noise and has the power to punch above the weight of its 1.6L displacement. This particular motor has gone through the works, with TODA Racing Cams, Head Gasket, Flywheel, and Pistons all working inside to give a much-needed bump in power. Keeping the engine in check is a Greddy E-manage ECU that has more parameters than the stock computer to control the engine. 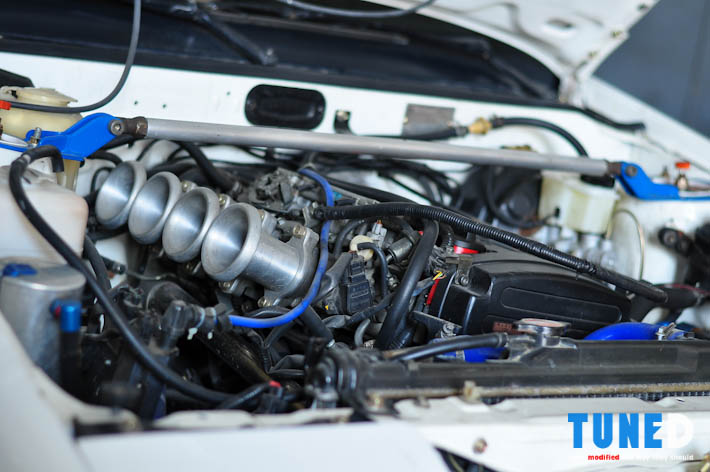 One of the more prominent details in the engine bay are these individual throttle bodies flanking the intake side. These are responsible for that distinguished throaty bellow every time the throttle is prodded. It’s always a treat just to hear a motor with ITBs being revved, let alone hearing one at full song! 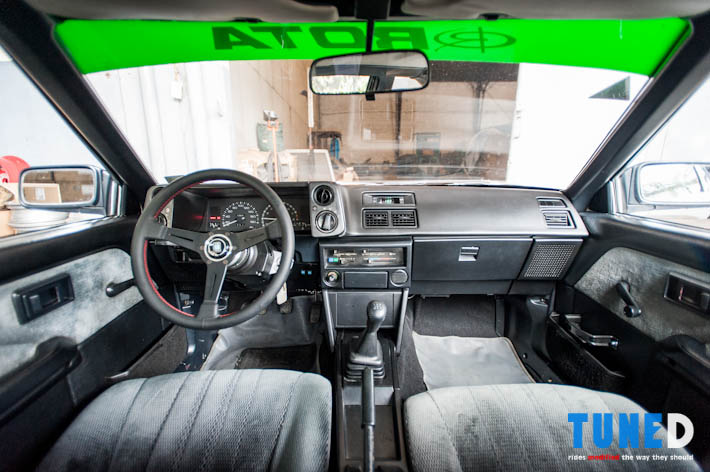 Hopping into the interior is an experience in itself, really. Upon opening the doors there is that whiff of 80’s Japanese cloth and plastic smell about the car that adds an air of authenticity and detail to the whole interior. As you plant yourself behind the wheel you notice all the nitty-gritty pieces around you, all the lights and dials working perfectly, door cards and dash trim all original and mint… 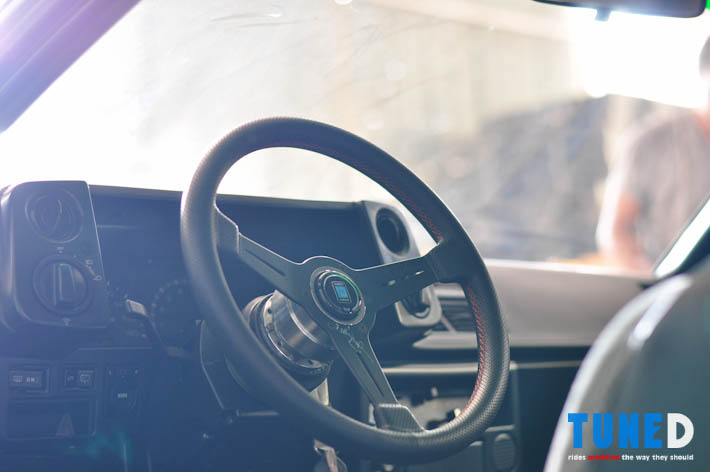 …and my what a treat it is to grab hold of the Nardi Classic steering wheel acting as the centerpiece of the cockpit! For those of you with a sharp eye you’ll notice a small signature underneath the horn button. You’ll be glad to know that that is the signature the Drift King himself. A renowned AE86 enthusiast himself, Keiichi Tsuchiya gave this car his seal of approval! Such is the immaculate feeling about the interior that it almost feels like a time machine that gives an idea of what this car really felt like back when it rolled off the factory, albeit with period correct and subtle modifications. 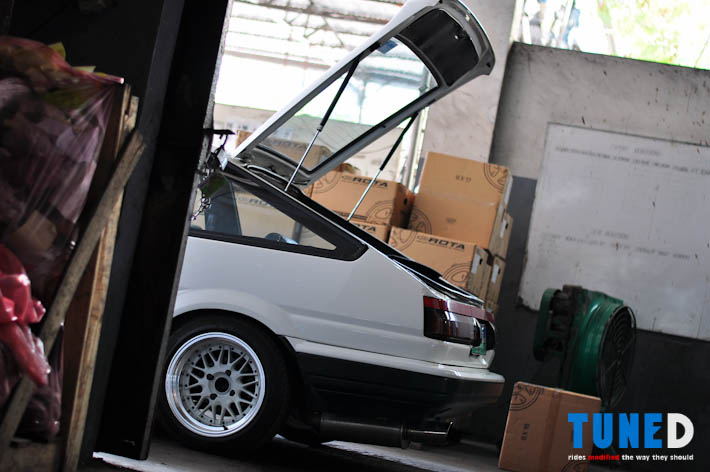 One other thing worth noting is the functionality of this car hasn’t been compromised at all. With the rear hatch working and still being perfectly held up by the dampers, this particular detail reminded me of the practical side of this car apart from the usual street drifter builds we see often these days. The rear hatch area even comes with an upper tray to conceal valuables in an enclosed area away from eyes prying into the rather large rear window. It’s all these tiny details that make an impression that no corners have been cut to bring this car back up to snuff despite its age.

While Toyota made a whole lot of these cars back in the 80’s, we hardly see any of these – rokus on our shores since they’ve never been sold locally in large numbers. Apart from their rarity, these also fetch a premium these days thanks to some kid delivering tofu up a mountain! With examples like the Rota AE86 puttering around town though, it’s easy to be reminded of why this car found a place in the minds of car enthusiasts across the globe.