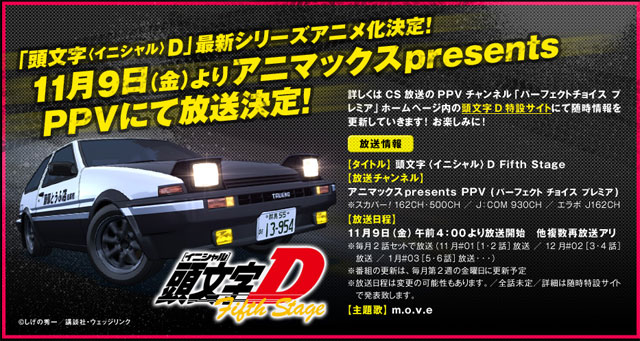 The phenomenal manga series by Shuichi Shigeno about drift, and ‘touge’ racing starring the Toyota AE86 or the ‘hachi-roku’ is set to make an animated comeback this November as officially announced on Animax Japan’s website just this week. The new installment will air on Animax Japan pay-per-view with two episodes per month. Music from Japanese Eurobeat band m.o.v.e. will once again be featured on the Fifth Stage of Intial D.

Father and son Bunta and Takumi Fujiwara, the Takahashi brothers, Itsuki Takeuchi, and Natsumi Mogi are listed on the page and will be expected to be in the Fifth Stage. The original telecast will obviously be in Japanese. No announcement has been made as to when DVDs will be available.

View all posts by Brent Co →