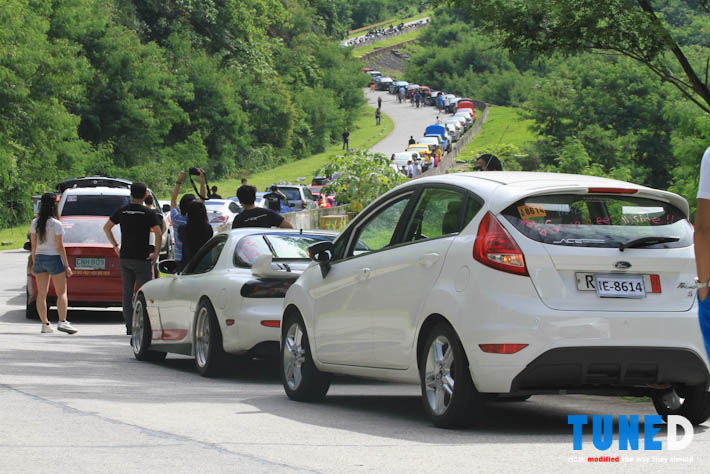 Going on a road trip has always been one of those things that seem to come naturally to any car enthusiast. The farther we drive and the more opportunities we have to enjoy our machines, the better. For the ones who truly understand what it means to be behind the wheel, it’s not the destination that matters, but the journey itself. The boys from Team A and Ozawa JDM know this all too well, which is why they have set out to create The Epic Matsuri Series to cater to those who seek the perfect driving roads across the country. Matsuri, if you’re wondering, is Japanese for ‘festival’ and in this case is meant to celebrate the spirit of driving. What we have here is the first event that’s become somewhat of an annual fun run for the crew, the Epic TanayMatsuri 2013: The Tänaybürgring. 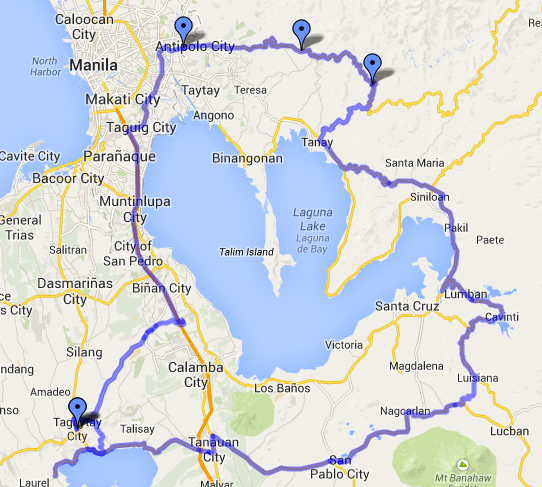 Held last July 28, 2013, The Tänaybürgring – a name obviously inspired by some famous race track in Germany – is the loop circumnavigating Laguna De Bay via Sierra Madre, Rizal, and San Pablo City and merging into SLEX via Calamba, Laguna. Filled with switchbacks and winding roadssnaking around several mountains as well as dual carriageways from one town to the next, the route proves to be an interesting getaway from the hustle and bustle of Metro Manila traffic. 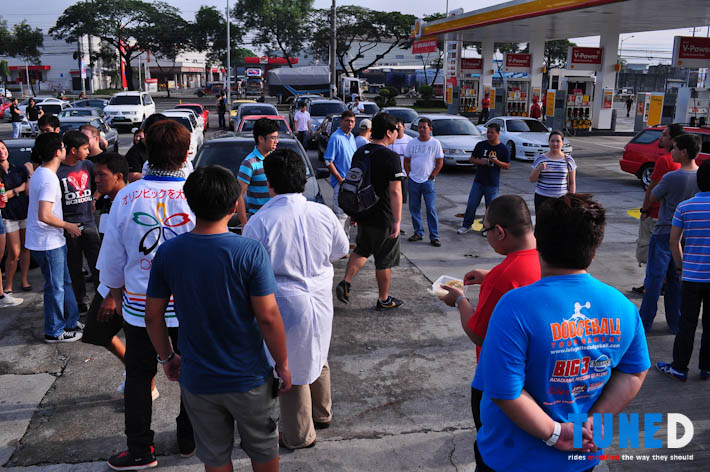 If you’re familiar with how a fun run works, you’d be used to waking up early on a sunday morning, warming the car up, and going to a gas station such as this to meet with your car club buddies. That morning was pretty much the same scenario for us, except instead of meeting up with the usual 10-15 cars we were met with around 50 cars parked up at Shell Marcos Highway, filling the station’s parking space to the brim! With that many cars and drivers having several passengers per car to enjoy the trip with them, certainly the number of people participating were about double the number of cars. This was, even for the organizers, a very surprising turnout for that morning. Considering it was their job to keep everyone safe and prevent anyone from getting lost, well let’s just say the organizers had their work cut out for them. 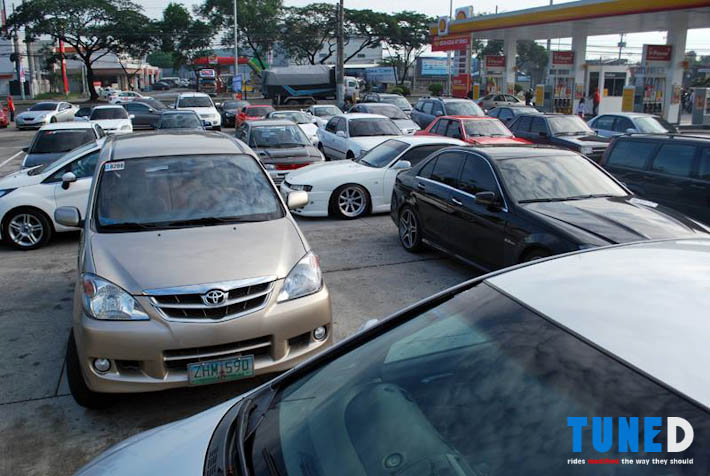 What made this event even more special is the diversity of cars that showed up. Yes, that is a Toyota Avanza parked next to a Mercedes Benz C63 AMG with a stanced S14 Nissan Silvia behind them. From that morning meet-up alone it was easy to tell that there was no bias with regards to the cars that were present. 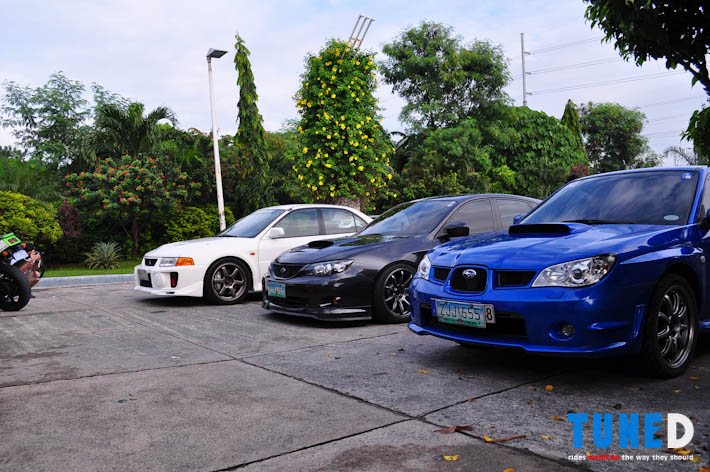 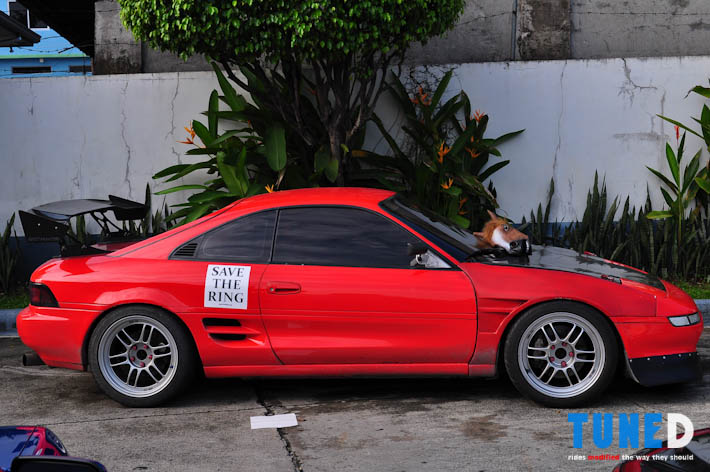 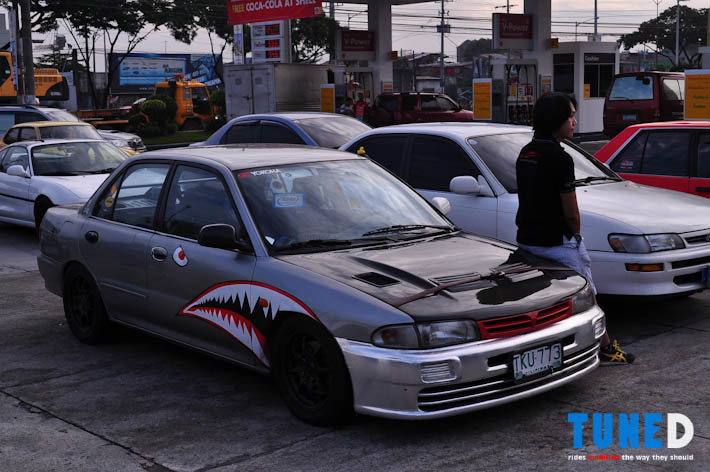 …this odd – in a good way – looking Mitsubishi Lancer…

…and even this pair of old Mercedes Benzes! The variety of vehicles that were present to join the run just goes to show that everyone was out to enjoy the drive whatever it was they were behind the wheel of. 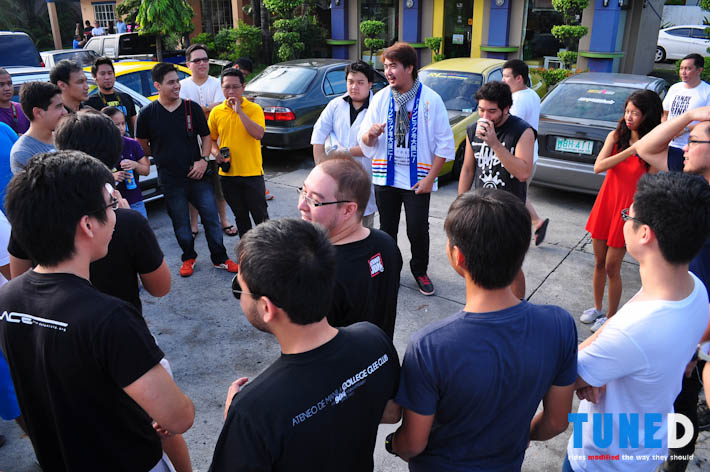 Before setting off on the long trip, a thorough safety briefing was conducted and route directions were given by the organizers to ensure that all drivers and passengers understood that this event is by no means a ‘race’ or a ‘competition’ in any way. Nobody had to get anywhere in a hurry, and everyone was advised to drive within their limits to make the most out of the trip. 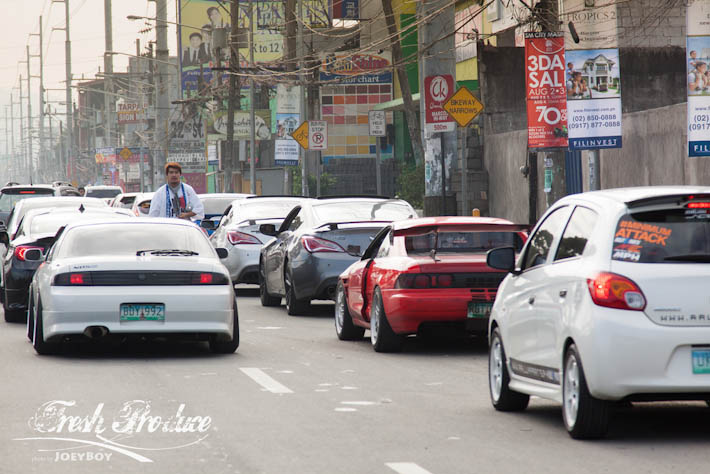 Once that’s been taken care of, all the 50 or so cars rolled out of Shell Marcos to line up as we begin the trek towards Sierra Madre, Rizal. During the briefing drivers were split into two groups; those who are running the route for the first time, and those who pretty much know the route and knew what they were doing behind the wheel. The former convoy was guided by a pack leader as well as a sweeper car for those who might get lost while the latter went at their own pace and was just assigned several stopover areas to regroup. 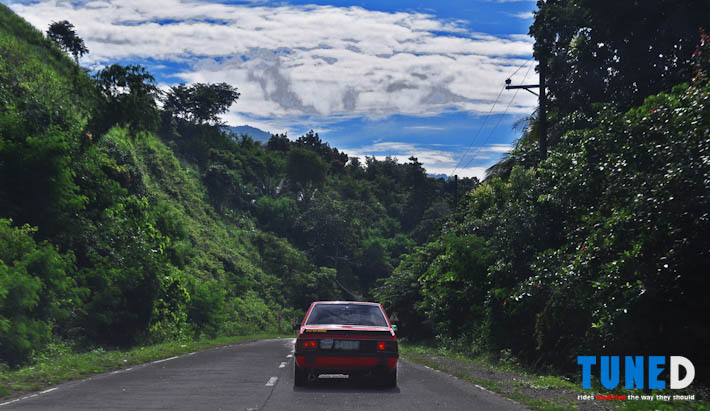 With things on their way, soon enough we’ve gone past Antipolo City and into the start of the Sierra Madre twisties. The cue for the start of this road is this long uphill stretch that leads in between two hills like it’s right in the middle of a valley. 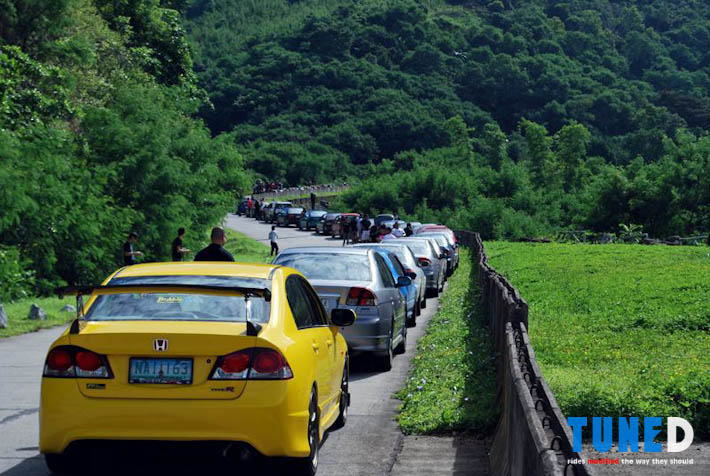 Our first stopover is this scenic view of the Sierra Madre mountain ranges, about a good 10km or so from the start. This relatively straight area is known as the ‘waterfall’ section of the route since there’s a tiny waterfall on the rock face to the left. That day though, the spectacle to behold was the long line of cars parked up for the stop all the way to the next corner at the top! Even for seasoned veterans of this route, it was a rare sight to see this long stretch filled with cars parked on the side with people getting down to admiring the view. 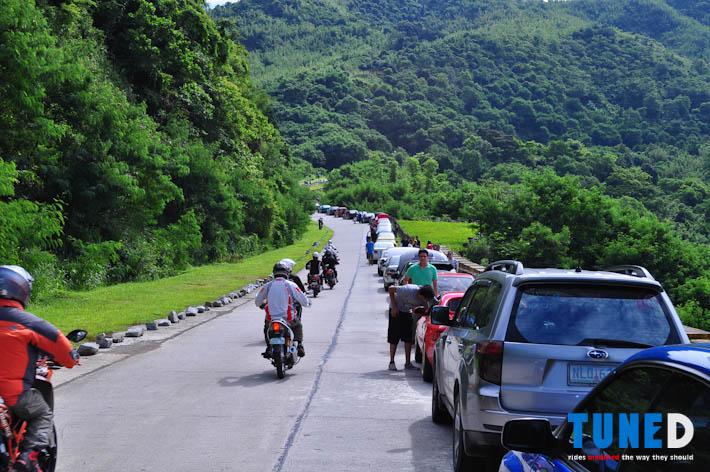 To most participants of the run, this stop was pretty much the defining moment of the day. Indeed seeing the grand scale of participants going en masse towards the hills was a sight for sore eyes. 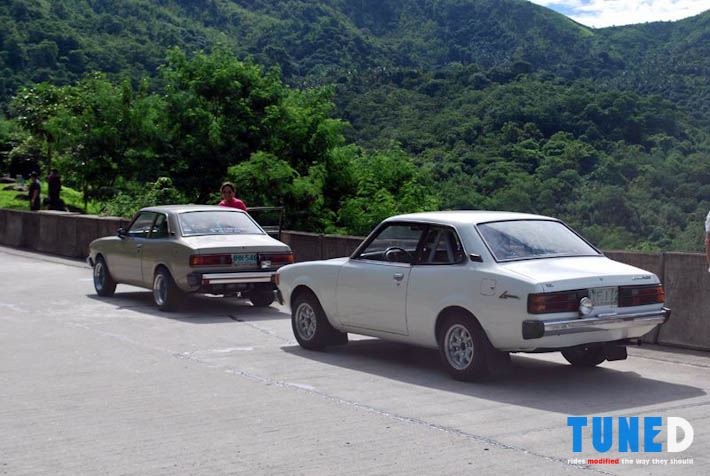 Having a view like this for a background merits a couple decent photo-ops for the cars for sure! Here we have a pair of 1st Gen Bar Type Mitsubishi Lancers that, despite their age, properly held their own throughout the trip and were driven rather well by their owners. 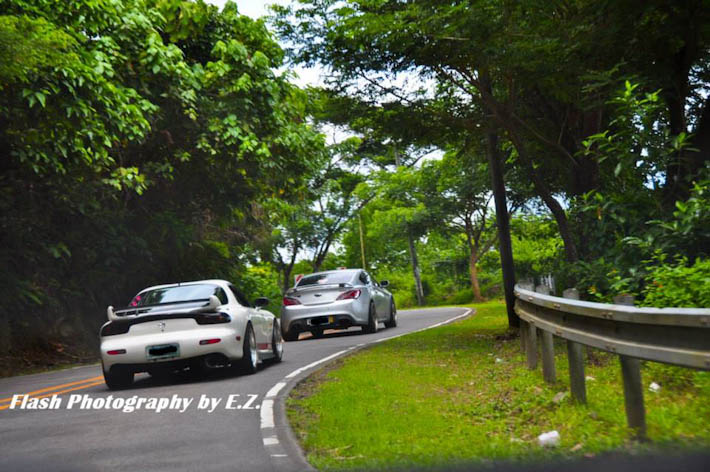 What use is a good mountain road without a proper Japanese sports car to make the perfect ‘touge’ ensemble? We had this sweet Mazda RX-7 with us during the trip to provide an extra spin – pun much intended – to our lineup. This thing kept snapping necks as it passed by with its clean curves and the unmistakably audible ‘brap-brap’ noise its rotary engine makes. 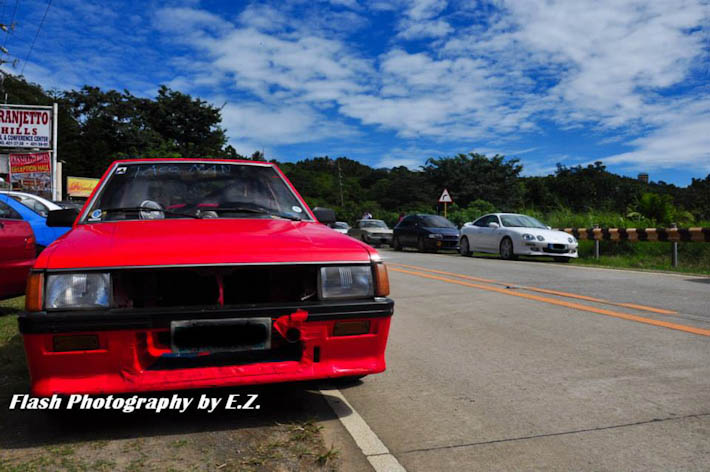 Our next stop is further up the mountains at a recreational resort called Pranjetto Hills. Often this is where the Sierra Madre regulars – both on four and on two wheels – stop to have breakfast before heading back down on a typical sunday morning run. We however had a long way to go because we weren’t even half way through! That said, our short stop here was enough time for the cars to cool down and for the rest of the convoy to catch up. 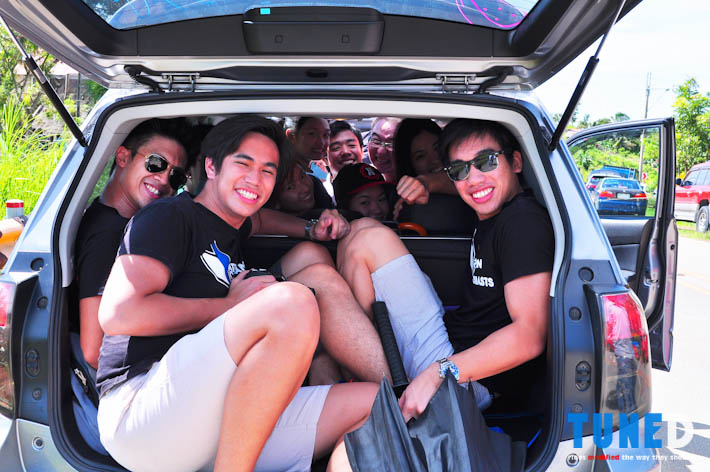 The good thing about the Tänaybürgring is that it is such a light-hearted and relaxed event. It could be whatever you want the trip to be; a test for you and your machine, a road trip date with your significant other, or, in the case of my group of friends, a means to find out how many people will fit inside a Subaru Forester!

As the group proceeded with the rest of the trip little by little the drivers went into uncharted territory. There were often times that people would get lost and stop in the middle of nowhere to call friends and regroup. Others however took this as a chance to get down and grab a couple photos. With subjects like this 6666 Customs Rocket Bunny kitted Nissan 240SX in the pack I take it getting lost wasn’t too bad for some of the guys! 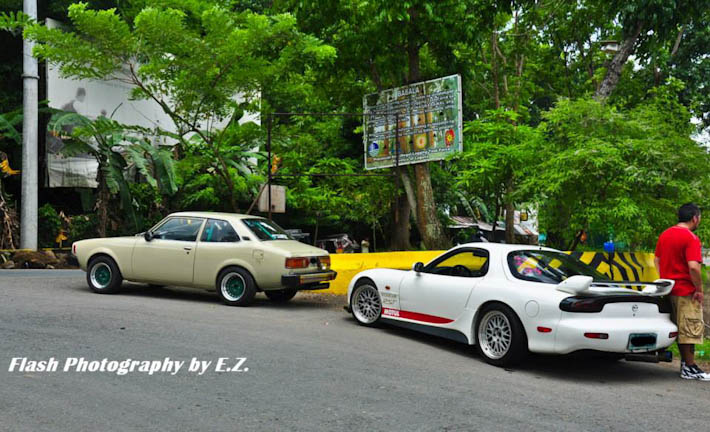 With some cars falling far behind it was getting to be pretty hectic for some of the guys ahead to keep going with the route without losing the cars behind them. Given that we had to wait awhile for the others, we took a quick detour from the National Highway circumventing Laguna De Bay into a resort along Lake Caliraya. 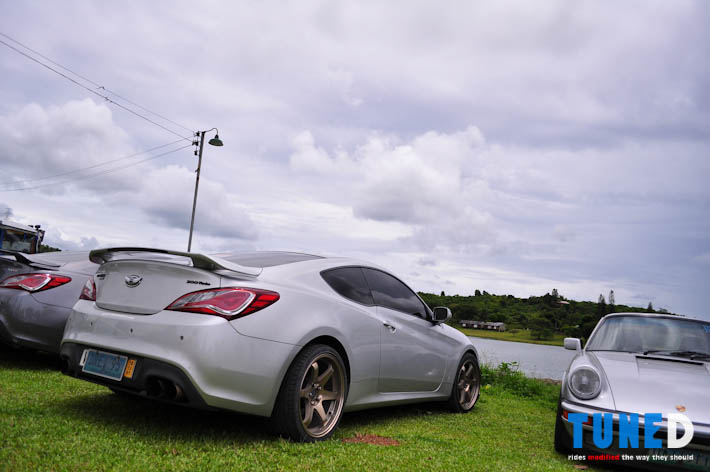 They say that the things that are unplanned are those that yield the nicest of memories, and this bit of the trip was no exception. With ample parking facing the lake itself, everyone had the opportunity to get down, stretch, and admire all the surrounding nature that they’ve brought themselves towards. 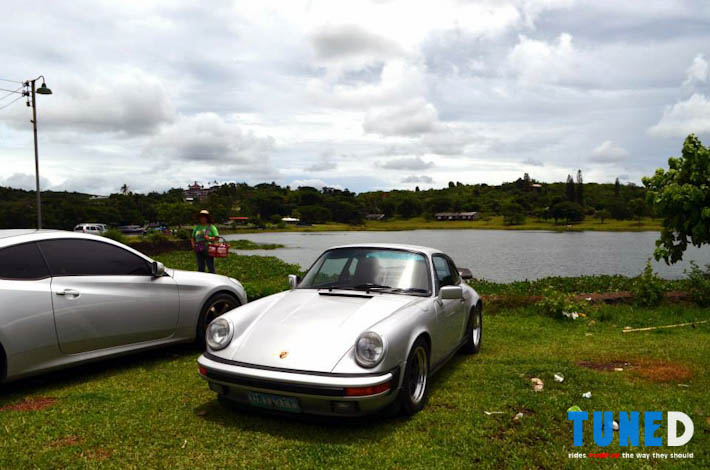 Think our trip’s roster was lacking a bit of German iron? Think again. I’m sure the owner enjoyed driving this pristine Porsche 911 all the way here as much as others enjoyed seeing it parked beside the lake! 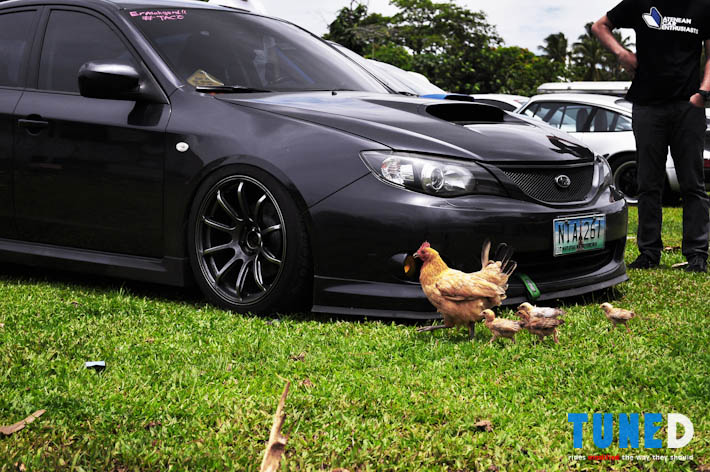 Has your car ever lived up to chicks digging it? I know mine has. Immediately after parking my WRX and airing it down on the grass these critters flocked towards my car. Quite the audience this mother hen and her chicks, good thing I had my camera handy as this is probably the most priceless photo of my car ever! 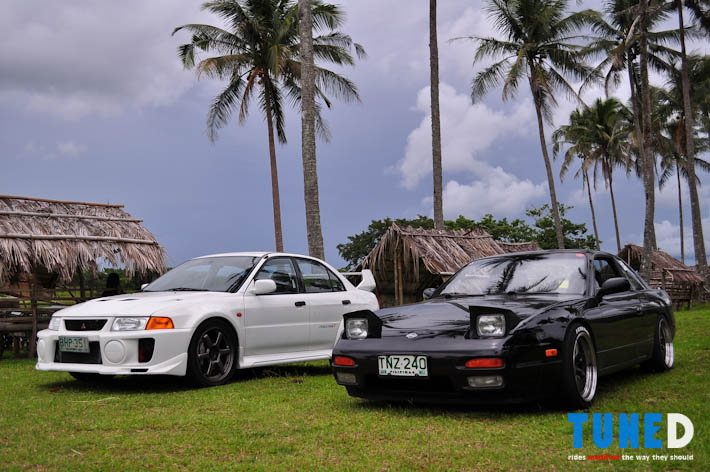 After parking beside the lake we walked towards another part of the group that was parked further up in another resort. It appears they have a cozier parking space with palm trees and huts surrounding them too! These guys would be here quite awhile however… 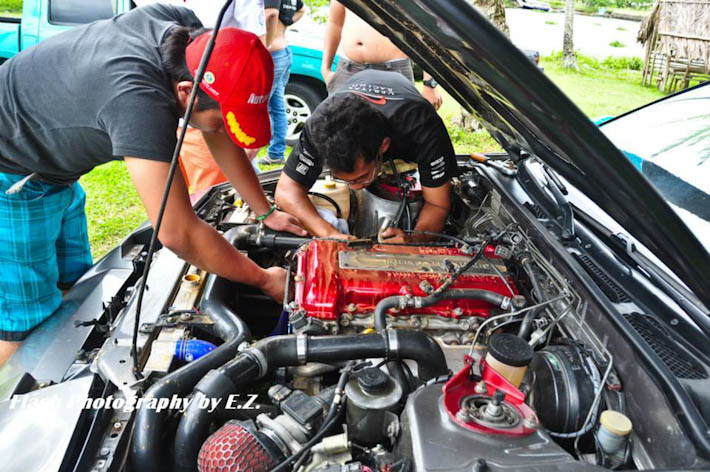 …since their buddy in the Rocket Bunny S13 blew a radiator hose. Thankfully a make-do fix was performed in order to get the car home for a proper replacement. 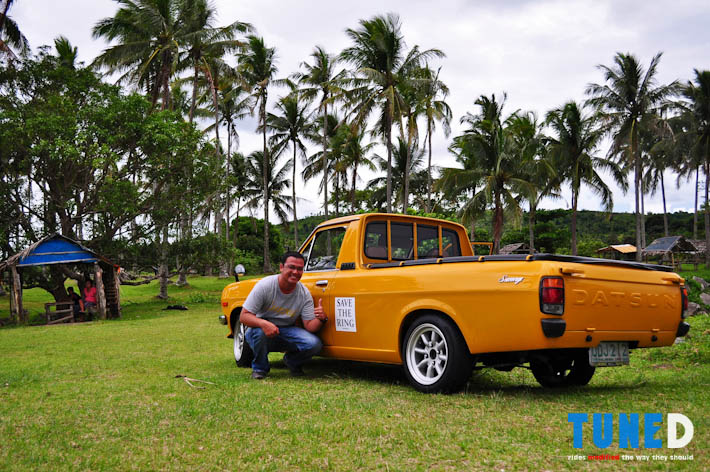 Here’s another angle of that resort’s parking area, and with a totally different car parked there too! This is a Datsun Sunny Pickup that hardly looks like it’s a day old. Despite its clean restoration this is in stark contrast to garage queen show car restorations since, as you can tell, this car gets driven frequently over long distances!

With everyone eventually gathered and with the next course of action planned, we returned back to the original route along the National Highway towards Los Baños and Calamba in order to merge back to SLEX. 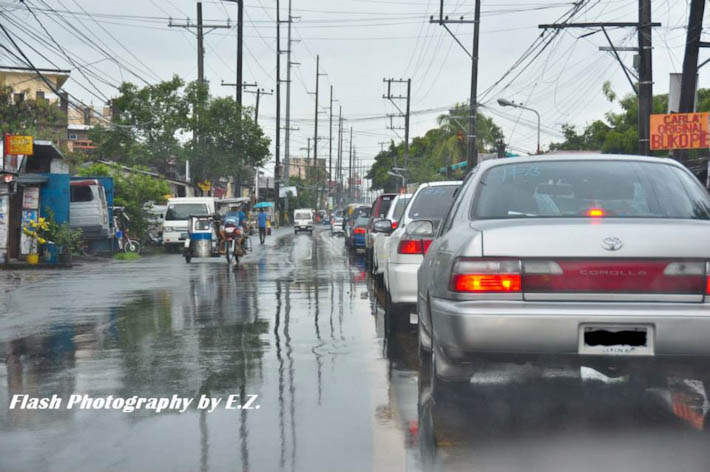 From Los Baños, we encountered a slight drizzle that eventually turned into a full downpour as we approached Calamba, Laguna. Drivers had to concentrate harder as the rain got stronger to a point that visibility was reduced to the taillights of the car in front.

Eventually though we cleared Calamba and merged towards SLEX and into Sta. Rosa where we had our final stop at Nuvali Solenad 1 for a well deserved late lunch. 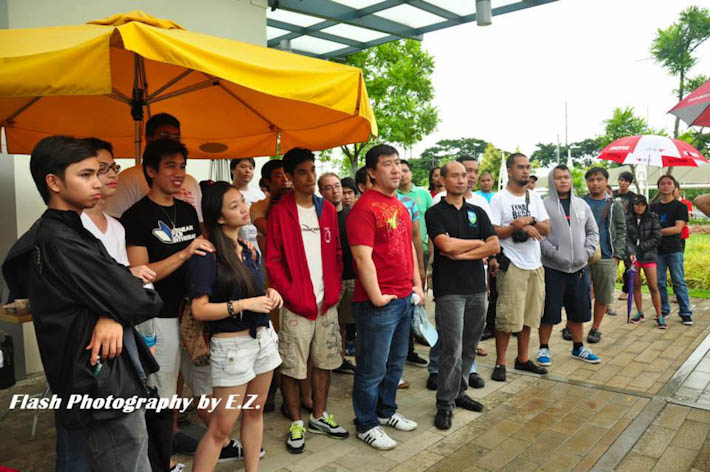 Once we’ve filled our stomachs and shared a good number of stories about the trip, the organizers gave us a quick debriefing of what the event was all about and how they were delighted to see that plenty of those who embarked on the trip completed it full circle to the finish. 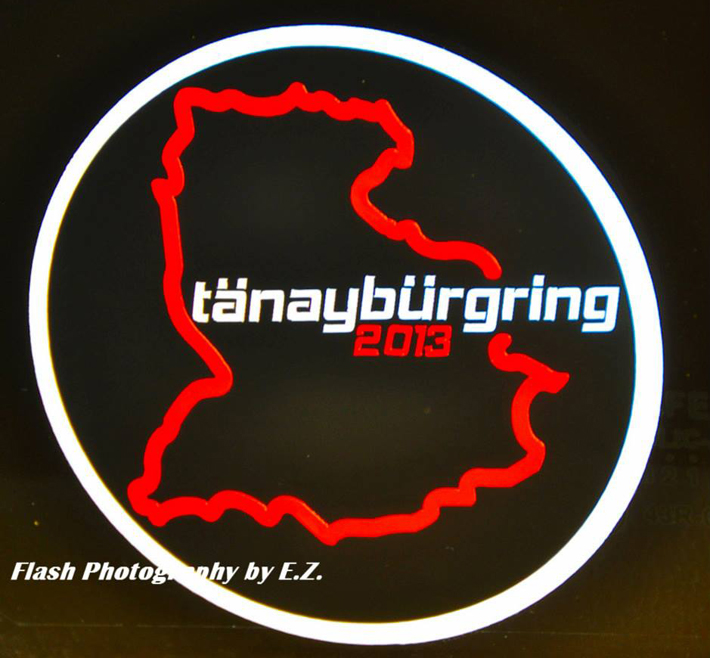 Each participant that completed the trip was rewarded with this sticker. A badge of honor to signify that the car this sticker has been adorned onto – as well as its driver – has endured the long journey around Laguna De Bay. Surely you won’t be seeing one of these on a trailer queen! 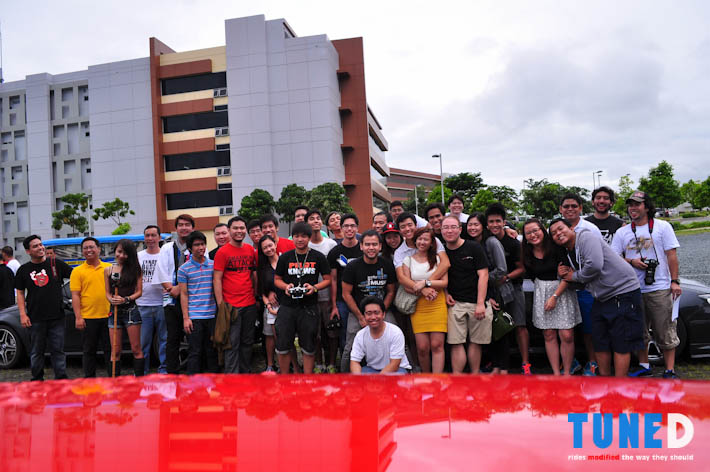 All in all, the cars and the open roads are only two-thirds of what made that day a Sunday to remember like it was yesterday. It wouldn’t have been as epic had it not been for the people that I shared the trip with. Even as I write this half a year later, I can still recall all those epic moments throughout the trip when laughter and smiles were shared among all the people we were with. Without several quirky personalities, a bunch of my good friends, and some new ones I met on that day, I wouldn’t have been able to tell a story this long about the event. That said, the Tänaybürgring really was epic in its own right, and is something I genuinely think any discerning car – or life – enthusiast should participate in. It’s January now, and with six months to go I take it we all have more than enough time to prepare our cars, gather our friends, and pack some snacks to join the next Epic TanayMatsuri for 2014!

P.S. There’s actually a video of this event:

Photo Credits to the following individuals, thank you for making this story extra colorful: